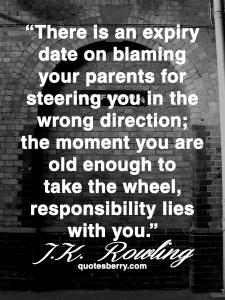 What I am about to discuss are the ideas that make me fall on my knees daily and say, “Dear God forgive me for my part in causing the downfall of our culture.”

This article, and the one that follows, is more about late Baby Boomers’ and Generation X’s parenting than about the Millennials.  The posting of this article marks the beginning of my twenty-ninth year of working with students and parents in teaching, counseling, administration, public speaking, and consulting.  Although no one announced it at the time, in 1987 I was beginning a career as a member of Generation X when the group now called the Millennials was being born.  Members of the group have been my clients, students, friends, employees, and children. This is the group that has been parented by my generation and those at the end of the generation before me.  This is the group that has grown up with technology that I never guessed would be possible in my lifetime.  This is the group that many, including myself, have maligned for being entitled, self-absorbed, egotistical, demanding, and just plain ol’ too big for their britches.  They have been accused of seeking out increasingly liberal ideas cut into sound bites and resisting the move from adolescence to adulthood.  But that’s not all of who they are.  They can also be hesitant to accept statements at face value and extremely loyal. They don’t hold back any punches.  More and more, I tend to believe that my generation and our parenting has contributed to this generation’s characteristics.  Where we have acted at all, we have affected them in a negative way; where we have ignored them, we’ve made them stronger people.  We failed.

The parents of the Millennials, the late Baby Boomers and Gen Xers,  took the economy, job market, and societal pillars, balled them up in a mangled ball, and tossed them to the Millennials.  Now, that they have not performed as we would like, we scold them when we were the ones who fostered the good, the bad, and the ugly in what they now are.  What are the seeds, what manure did we give them, and how have they grown today?  Here are just a few pieces of the stereotype.

What can we do?  Will the late Gen Xer and the Millennial raise a generation that is more of the same?  We’ll discuss that next time.  For now the blog is so long that no one has the attention span to finish it.